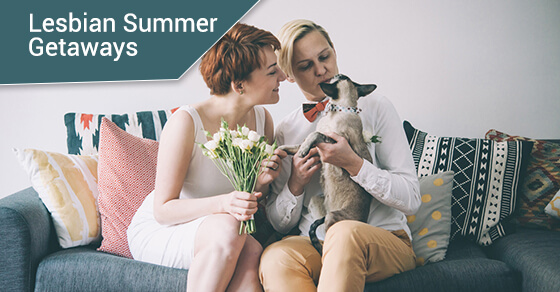 Whether you prefer laying on a beach or hitting up the museums, one thing is for sure — the summer months are perfect for lesbian getaways. You may be hopping on a plane with your long-time girlfriend, or maybe you’re more interested in traveling solo and meeting some new women along the way. Whatever you’re looking for, we’ve come up with a list of gay-friendly destinations you won’t want to miss!

Known as The Hub for Lesbians, Provincetown is a lovely little seaside destination at the tip of Cape Cod, Massachusetts. It’s considered one of the safest places for lesbians visiting the United States and has a ton of vacation activities nearby. If you’re into art galleries, museums, and a vibrant nightlife, then Provincetown is definitely for you. The area has been going through a bit of a lesbian renaissance, and its tourism industry has been courting younger queer women.

When choosing accommodations, definitely opt for a quaint B&B as opposed to a traditional hotel. One of the gorgeous guest rooms at the Roux Bed & Breakfast is especially romantic. Their suites come in different themes that are playful, with French-inspired decor. The lesbian scene is huge in Montreal given that Quebec was one of the first provinces to legalize same-sex marriage in 2004. Montreal’s gay district — known as Le Village — is located just east of the downtown core and is one of the quirkiest areas of the city. You’re sure to have a good time given that this is the largest gay village in North America. Some might even say it’s more of a good time than San Francisco, albeit a little colder!

Montreal is known as Canada’s mecca for queer women. A trip during the warmer months will let you experience this French-Canadian city in all its glory. From May to September, the part of Sainte-Catherine Street that cuts through the Village is for pedestrians only. Take a stroll along the car-free zone and stop in at one of the numerous lesbian bars for a refreshing pint. And if you’re a foodie, Montreal claims to have the most restaurants in Canada per capita. While you’re there, let yourself indulge in the tourist attractions because they make for very romantic excursions! Take a walk through the beautifully eerie Notre Dame Basilica. Or go for a lovely picnic at Mount Royal with breathtaking views of downtown Montreal.

Sydney is the lesbian capital down under. After a long fight in the late 70’s for gay rights in Australia, Sydney has been welcoming lesbian travelers with open arms for years. Although the city’s famous Mardi Gras celebration happens in February-March, the Emerald City is still a fabulous destination for lesbians in the summer too. Take a walk at Darling Harbour or feel the soft white sand on your toes at Bondi Beach.

If you’re dying to check out Sydney’s food scene, a visit to Carriageworks Farmers Market is a must. French crepes, Vietnamese pho, and Korean bibimbap can all be found here! This Saturday market is popular with lesbian tourists and locals alike, so you’re sure to find other wonderful women roaming the stalls too. And no trip to Australia is complete without a scuba diving experience. For the adventurous types, companies like Abyss Scuba Diving offer lessons for all skill levels.

After a full day in the sun, you may be wondering where Sydney’s lesbians go at night. Ching-a-lings on Oxford Street or The Vanguard on King are some of the more popular spots for drinks and dancing.

Affectionately known as ‘Gay Paree’, Paris is one of those cities where you can be free as a lesbian and never feel isolated. PDA among women isn’t unusual here nor is it frowned upon. Whether you’re visiting Paris as a couple or a large group, be sure to check out the events calendar before you go. Late June is one of the best times to visit because of the city’s Gay Pride Parade.

Don’t forget to tour Paris’ gay district, Le Marais. You can begin by taking a stroll and window shopping in the fashionable Haut-Marais. Then go for lunch in the city’s oldest covered market, the Marche des Enfants Rouge. The L’Estaminet is a popular restaurant managed by two lesbians. From here, you can walk down to the gay district by taking the Rue des Archives. This famous street is known for its French designer boutiques and charming art galleries. To learn more about tourism in Paris, check out the Centre for LGBT in Paris before taking off!

Still looking for that someone special? Bespoke Matchmaking works exclusively with exceptional gay men and lesbians who are ready to begin a loving relationship. Give us a call at  +1-1-888-422-6464 for your free consultation today, or contact us here.