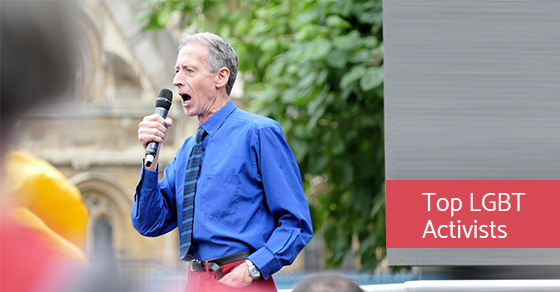 It is always a good time to celebrate and be inspired by the top LGBT activists in the community.

Audre Lorde once identified herself as a black lesbian, feminist, mother, warrior and poet. Her entire life’s work was dedicated to addressing racism, homophobia and sexism in her poetry, including the exclusion of “lesbian” and “black woman” in society, fighting in spite of all of the difficulties she faced. You may even recognize her famous quote, “Your silence will not protect you.” Needless to say, it is easy to see why she has been an inspiration to many and why she will continue to live on through her work.

Bayard Rustin was a civil rights activist in the 50s and 60s who is most known for organizing the March on Washington for Jobs and Freedom in 1963. He was openly gay and was even arrested for “public homosexuality.” He spent his years speaking out and writing about economic equality within the Civil Rights Movement, as well as fighting for the rights of gays and lesbians.

The LGBT community would not be where it is today without the early champions. This includes Peter Tatchell, who has been fighting against anti-gay laws in the U.K. since the ’60s. But he doesn’t limit himself to the U.K.; he is also working towards the legalization of gay rights in 76 other countries around the world.

Laverne Cox is significant in popular culture as the first transgender woman of colour to have a leading role on television, where she currently plays Sophia Burset on Orange is the New Black. She is also an activist herself and is currently in the midst of producing a documentary, Free CeCe, about the violence facing trans women today, including the story of a woman who was unjustly sentenced to prison after being the victim of a transphobic attack.

Lady Gaga is another celebrity at the forefront of popular culture who speaks out about LGBT equality as an openly bisexual woman herself, using her music as a vessel to communicate these issues. She started her own foundation, the Born This Way Foundation, which seeks to empower young people to live more kindly and bravely. Interestingly, she was also the first musician to have a number one song with the word “transgender” in it.

If you are looking for a professional matchmaking service, contact our matchmakers at Bespoke Matchmaking for more about our customized services.